This project is an extension of our position paper on the use of biosimilar medicines in colorectal cancer. The project aims to develop a variety of educational tools. These will be used to improve patient education on the value of biosimilars and the patient role in the decision-making process around treatments. It also aims to improve clinician – patient – nurse communication. The project has a European scope with local activities in Belgium, Poland, and Spain.

Outcomes of the project will include:

We will also generate a nurse-specific training platform to enhance their education on biosimilars. Moreover, we plan to engage with the political world at European level to shape the policies and guidelines around biosimilars.

The messages of all materials will be the outcome of intense discussions with all relevant stakeholders (patients, nurses, clinicians, pharmacists and health economists) knowledgeable in biosimilars.

We aspire that our outcomes will not only change the use of biosimilars in colorectal cancer but will also influence other disease areas.

The following experts are working with Digestive Cancers Europe’s Zorana Maravic and Vassiliki Fotaki on this project:

Fernando de Mora is Professor of Pharmacology at the Spanish Universidad Autónoma de Barcelona, where he obtained his PhD. He worked as a postdoctoral fellow at Harvard Medical School (USA), and shortly after he obtained a Master of Business Administration (MBA) from the University of Chicago (USA). He acts as an Academic Consultant and speaker in biosimilars science, regulation and market for healthcare administrations, and public and private organisations (biopharmaceutical industry).

Johan De Munter graduated as a nurse in 2001 and worked for several years as a registered nurse and nurse consultant in an oncology and haematology ward in two general hospitals in Belgium. He has postgraduate qualifications in pain management, cancer care and teenage and young adult cancer care. In 2010 he transferred to the University Hospital Ghent where he continues to work as a nurse consultant in the haematology/stem cell transplant unit. His professional interests include patient education, supportive care needs, survivorship and adolescent and young adults (AYA) care. He was President of the Chemotherapy Working Group and Board Member of the Flemish Society for Radiology and Oncology Nurses, and Vice-President of the Belgian Haematology Society Nurses’ Committee. In 2017 he was elected as a new European Oncology Nursing Society (EONS) Executive Board Member and is the new President-Elect. He is currently working as an Assistant Nurse Manager at the University Hospital Ghent Cancer Centre.

Dr Giuliani is a consultant in Medical Oncology currently working at the Clatterbridge Cancer Centre, Wirral, Liverpool, UK. Her main interests are breast cancer and clinical and regulatory development of innovative drugs. She earned her medical degree from the University of Rome, La Sapienza, in 1996 and completed the specialty training in medical oncology in 2000. Dr Giuliani worked at the European Medicines Agency, EMA, as National Expert on secondment (2011-12) and since April 2012 she continues the collaboration with EMA as core member of the EMA Scientific Advisory Group in Oncology (SAG-O). Dr Giuliani is currently Director of Public Policy of the European Society for Medical Oncology (ESMO) and Chair of the ESMO Global Policy Committee and is a Member of the ESMO Executive Board and ESMO Council. Dr Giuliani is the author of peer reviewed articles and she regularly lectures at international meetings.

Zoltán Kaló is a Professor of Health Economics at the Centre for Health Technology Assessment of Semmelweis University in Budapest, Hungary. Before moving to Semmelweis University in 2019 he was the co-director of an international master program in Health Policy, Planning and Financing at Eötvös Loránd University (ELTE). Dr. Kaló is also the founder and leader of Syreon Research Institute, an international research corporation specializing in health policy, health economic modelling and technology assessment. He has 25 years of international experience in academia and industry, specializing in health systems design, HTA implementation, health economics and outcomes research, patient access and pricing policies of healthcare technologies.

Marta Méndez studied nursing at the Spanish University Francisco de Vitoria. She joined the University Hospital Puerta de Hierro in Majadahonda, Madrid, Spain in 2010 as an oncology nurse. Since 2013 Marta has been working with cancer patients as a clinical research nurse. Since 2014 she has taken part in different projects related to exercise and cancer.

Currently, she is working on a project funded by Seom-Fontvella to identify biomarkers related to fatigue in women with breast cancer. Marta is working and leading educational competence strategies for cancer patients, with a special focus on how the lifestyle can be used as a paradigm of changeable risk factors.

Kate O´Regan leads the Communications and Stakeholder Relations team at Medicines for Europe, the trade association representing the generic, biosimilar and value-added medicines industry. Kate joined Medicines for Europe in 2017, with previous experience in the oncology policy setting. Kate has worked within the Biosimilar Medicines Sector Group of Medicines for Europe to integrate the patient perspective and strengthen patient involvement through working partnerships with patient advocacy groups and representatives in a range of therapeutic areas.

Dr Peeters is Board Member of the Flemish Society of Gastroenterology, Chair of the Belgian Group of Digestive Oncology and Member of the Belgian Society of Medical Oncology, the European Society of Medical Oncology, the American Society for Clinical Oncology and the gastrointestinal group of the European Organisation for Research and Treatment of Cancer. Within EORTC, he is co-chair of the metastatic colorectal task force. His research interests have included the identification of molecular markers and therapy modulation in digestive tumours. He has been involved in many clinical studies on therapeutic agents for gastrointestinal tumours, published numerous articles in peer reviewed journals and was author of several chapters in oncology books. 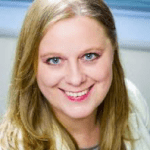 Iga Rawicka is an expert in the field of healthcare communications, with over 20 years of experience gained while working in international pharmaceutical and medical companies. For several years, she has been concentrating on her own activities implementing various projects, including educational campaigns in many therapeutic areas, supporting patients in improving their quality of life and striving for better access to treatments in Poland in accordance with international standards. She has been an active Board Member of EuropaColon Polska Foundation since its establishment in 2017. EuropaColon focuses on supporting patients with gastrointestinal diseases, mainly colorectal, pancreatic, stomach, oesophagus and liver cancers. Since 2019, Iga has been a Board Member of DiCE.

Dr Ruiz-Casado trained as a Medical Oncologist after studying Medicine at the University of Salamanca, Spain. She later obtained a PhD at the Universidad de la Coruña, Spain. After several appointments as a Medical Oncologist in different hospitals in Spain, she has been working at the Gastrointestinal Unit of the University Hospital Puerta de Hierro in Majadahonda, Spain since 2012. In parallel, she is an honorary professor and teaching clinical collaborator at the School of Medicine at the Autonomous University of Madrid. She is an expert of the European and Spanish Medicines Agencies. Dr Ruiz-Casado has authored more than 50 publications in the field of Oncology.

Yannick Vandenplas graduated with a master’s degree in drug development at the faculty of pharmaceutical sciences (KU Leuven, Belgium) in July 2019. After his graduation, he started working as a PhD researcher at the research unit for clinical pharmacology and pharmacotherapy (KU Leuven). During this four-year research project, several studies will be conducted with the aim of formulating proposals for a more sustainable policy framework for best-value biologicals in Belgium. One of the topics that this research project will touch upon is how to improve patient communication and education about biosimilar medicines. This project is receiving support from the Belgian national health insurer (RIZIV/INAMI).

Arnold G. Vulto is honorary professor of Hospital Pharmacy & Practical Therapeutics of the Hospital Pharmacy at Erasmus Medical Centre in Rotterdam, The Netherlands. He obtained his pharmacy degree at Groningen University, The Netherlands, before completing postgraduate training at the Rudolf Magnus Institute for Pharmacology, University of Utrecht, The Netherlands and at the Karolinska Institute, Stockholm, Sweden. He joined the Erasmus Medical Centre in 1995, where he became the professor of Hospital Pharmacy in 2004. Professor Vulto is a founding member of the MABEL Fund (Market Analysis of Biologics and Biosimilars following Loss of Exclusivity) which is a collaboration between Erasmus Medical Centre and the Department of Clinical Pharmacology and Pharmacotherapy at the Catholic University of Leuven, Belgium.

In 2017 he was appointed Honorary Professor at the University of Leuven. He has been a member of the Board of Directors of the European Association of Hospital Pharmacists (EAHP) and was Chairman of the EAHP Scientific Committee from 2003–2006. In 2018 he was bestowed Officer in the Order of Orange-Nassau. Professor Vulto was Editor-in-Chief of the European Journal of Hospital Pharmacy Practice (2005-2012) and has authored or co-authored more than 150 articles in international peer-reviewed journals. Professor Vulto is one of the co-founders of the Generics and Biosimilars Initiative (GaBI) and of Biosimilars The Netherlands, for which he is the chairman.

Wojciech M. Wysocki graduated from Jagiellonian University Medical School in Kraków, Poland, in 1999. He is board certified in general surgery (2008) and surgical oncology (2011). In 2008 he received his PhD at Maria Skłodowska-Curie Memorial Cancer Center in Warsaw. In 2016 he was appointed Associated Professor (rehabilitation) at the same institution. From 2017 to 2019 he was Head of Department of Surgical Oncology at Maria Skłodowska-Curie Memorial Cancer Center in Kraków. Now he works at Andrzej Frycz Modrzewski Krakow University, Faculty of Medicine and Health Sciences, Department of Surgery and is senior consultant at the Department of Surgery, Surgical Oncology and Vascular Surgery in 5. Military Hospital in Kraków.

He is also a Deputy Head of Scientific Editorial Office at Maria Skłodowska-Curie Memorial Institute of Oncology in Warsaw. Prof. Wysocki is Board Member and was a President of the Polish Society of Surgical Oncology (PSSO) from 2018–2020; now he serves as past-President of PSSO. Dr. Wysocki has published over 130 articles in peer-reviewed journals and has co-authored many chapters in medical handbooks.

Would you like to know more about this DiCE project? Please contact us
Back to the projects